Things I know about hospitals 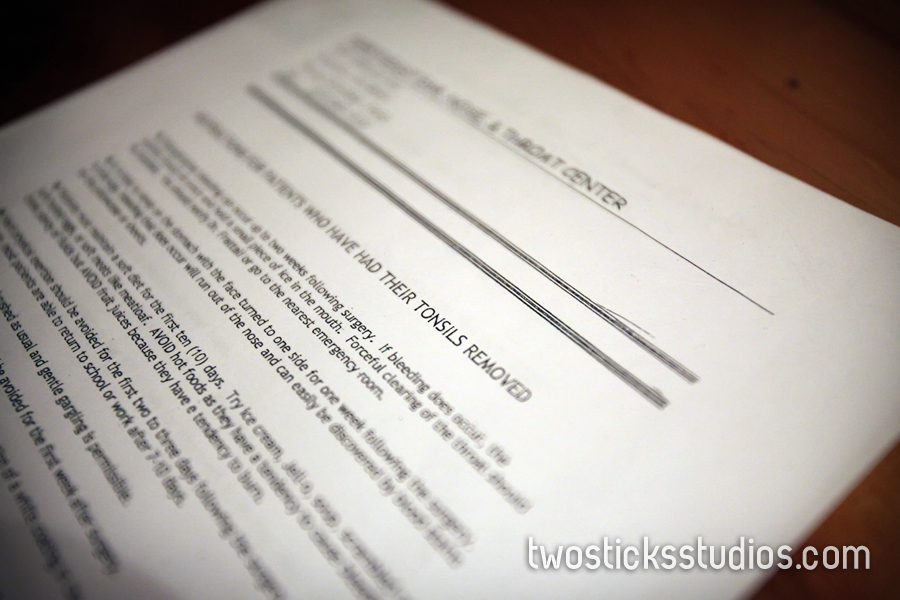 Some of you will already know that I had my tonsils out earlier this week. Depending on who you ask, it’s either the most horrifying, awful procedure in the world for an adult or it’s just plain torture. There doesn’t appear to be a whole lot of middle ground on this one. Generally, it’s viewed as being no big deal if you’re a kid and somewhere between liver transplant and amputation if you’re an adult. I kept telling myself there’s no way it can be this bad – despite all of the blogs dedicated to scaring the hell out of people who dare consider having their tonsils out.

Well, the surgery was Monday and I’m here to report that it doesn’t seem that bad. Now that might be the kiss of death because the recovery is supposed to grow harder during ther first week and I’m only on Day 3, but seriously people, suck it up a little. It’s still surgery – however minor it might be. There’s probably going to be some pain associated with it.

Anyway, I’ll probably regret that little rant and be in unimaginable pain within a few days. I’ll be sure to update if I am 😉 The whole thing did have me thinking, however, as I was lying in pre-op talking to various nurses and doctors and making small talk to take my mind off the surgery. I made a few observations about hospitals in general. Here goes.

1. A great nurse is way more valuable than a good doctor.

2. A bad nurse can ruin an already crappy day.

3. Orderlies have pretty tough jobs, and every one I dealt with took pride in doing the job the right way.

5. Doctors don’t find malpractice jokes nearly as funny as I do.

6. ORs are friggin’ cold in comparison to the rest of the hospital.

7. Patients who don’t wear glasses are at a huge advantage before surgery. If you do wear glasses, they take them from you pretty early and you have no idea who the parade of people coming to your bed are.

8. They put my IV in my left hand, which meant I had to sign all my releases with my right hand. I AM NOT AMBIDEXTROUS, although my right-handed signature would suggest my education level did not surpass the third grade.

9. It’s hard to pick up nurses wearing the sterile gown and hat with one asscheek waving in the breeze. It’s made even harder when your wife says, “Ignore my idiot husband.”

10. (GUYS ONLY) There’s a real temptation to turn down the offer of a wheelchair even though you clearly need it.

11. There’s nothing worse than your doctor promising you will be out of the hospital the same morning as your surgery only to find out you will be released after dinner.

12. There should be a Constitutional amendment that gives every patient a private room and a PRIVATE BATHROOM.

13. I think I should be allowed to inspect every piece of equipment that will be used to cut, slice, poke or prod my body beforehand. My doc used a Coblator. He seemed pretty excited about it. I had no idea what is was, but I think it was the main tool used to separate me from my tonsils. Anyone else think I should get a look at this before it’s in my mouth?

14. Having pre-approved and typed post-op instructions is way easier than remembering what your doctor said three minutes after you woke up in recovery.

15. There’s a special feeling that comes when you pass through the hospital doors and emerge outside.