Let’s get this right out in the open to begin with. We LOVE photo requests that are a bit off the beaten path. I mean, hell, we shot an engagement in November in the Lackawanna County Coal Mine Tour with the girl dressed as a canary and the guy in period coal miner clothes. And it was spectacular!

So when David emailed me a month or so ago and said “I’d like to have you guys shoot my wedding proposal,” it took about a second for me to get really excited. You see, David wanted all of this to be a secret, and he had a plan. He was going to rent a secluded cabin in the Poconos and surprise his beautiful fiancee by popping the question. And he wanted photos of it! Hell yes! Let’s do this.

So after reading the email I thought about the logistics of it. I came to one conclusion, we can totally do this  … and it was going to require a LOT of planning. And that was great because from what I can tell David and I both like having a plan. So it started. We emailed some details back and forth and I went on what would be two pre-proposal trips to the Poconos to scout the location and find places where Bob and I could hide in the woods near the cabin and still get a perfect angle on the proposal. I’ll admit, after the first trip I had some concerns. There was a bridge right outside the cabin that ran over a great stream. It was the perfect spot.  But could David actually take a knee to propose? I didn’t think so because I was afraid of the railing running right through his head in the photos.

Also, I wasn’t entirely sure there were two spots to shoot from. I had one perfect spot downstream. Upstream was a different story. There was a pile of cut wood I thought maybe I could hide behind. I even tried to rearrange the logs to give myself a peep hole from which to shoot through. The pile was frozen solid. The was some brush that had piled up in the middle of the stream that I could hide behind. But could I actually stand in the middle of the stream in the middle of January without losing a few toes. Probably not. So I left with a couple of problems. I need to see if David taking a knee was a must. And I might need a different location on the property.

So David and I emailed back and forth a few more times. He was definitely taking a knee. That was important to him. OK, we’ll figure it out.

This is where Bob is so invaluable as a partner to me. He wanted to go see the location and help figure out a plan. So Poconos road trip No. 2 was under way. We went and I showed him the property and what I was thinking. We did some test shots. Kneeling on the bridge was not going to be a problem. I had Bob take a knee in the spot on the bridge and I shot from the one location. His head was well above the railing. Phewww! OK, that’s good. All we needed now was another spot from which to shoot. We climbed all over the property, uphills, through the stream, down another walking path. No luck.  Then we found it. It’s always amazing to me when this happens. The spot was so simple. It was upstream just off an access road. Perfect. The best solution is often the simplest one.

I emailed David back. We were all set. I sent him test photos to show him the exact location on the bridge. We set up a time. We set up a group text in case there was any reason to abort or change plans. We agreed to use the clocks on our phones so we were all synced and ready to go.  This would go down at 2 p.m.

So the big day arrives and so does an ice storm. Perfect. Bob and I finally get to the property and the access road where the cabin sits is a sheet of ice. I had visions of driving down this road and crashing into the cabin and Dave having to explain to his fiancee, “Hey honey, this is Bob and Chad. They were going to photograph our proposal but now that their car is in our living room, we’re gonna tweak that plan.”

But we did finally get into position and were ready to go. I was staring at my phone without without blinking as 2 o’clock approached. This was going to be amazing. 2:01, 2:02, 2:03 …

He texted back, “Could be any minute now.”

We were still on. Just running a little late.

And then there they were, walking to the bridge. Yes, I get excited about this type of thing. My heart was pounding. I wanted to see David pull this off. We wanted great photos for him. There was a ton of effort that went into this and it’s amazing when someone has a vision and executes exactly what they want! The whole thing took about a minute. We fired off a ton of shots. David followed the plan perfectly. She, of course, said yes!

When it was over Dave, gave us a shout to come out of the woods and show ourselves. What a great moment. The look of surprise was great. This was easily one of my favorite jobs of the year. And it was all because David had a vision for what he wanted this huge moment to be. Thank you David, for letting us be a part of it.

Here are some of the shots. Enjoy! 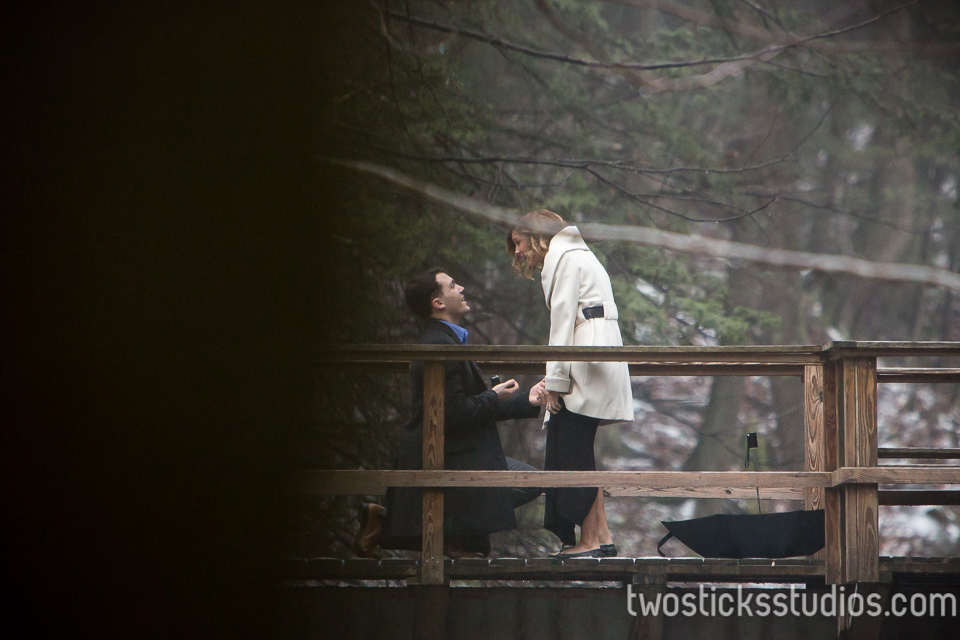 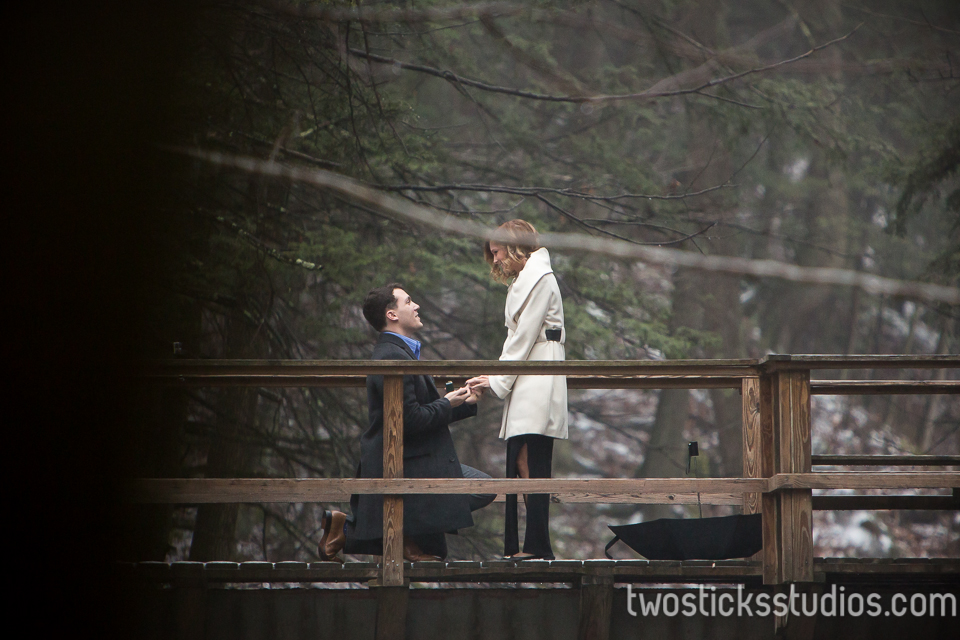 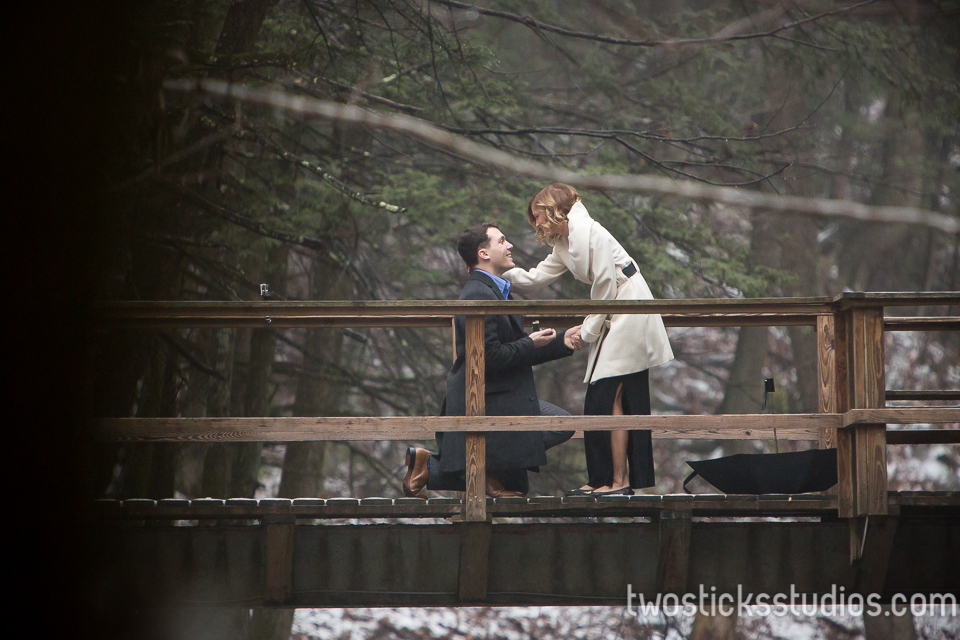